From climate disaster to climate justice

The historic announcement of the establishment of a loss and damage fund at the 27th United Nations Climate Change Conference (COP27) in Egypt is a major victory for Pakistan and the rest of the developing world on the diplomatic front. Since the havoc wrecked by the floods of 2022, the agenda of climate change and its compensation became the hallmark of our diplomatic endeavours.

The November announcement came after strenuous negotiations by G-77, a group of 77 developing countries led by Pakistan. Leading from the front, Pakistan and China negotiating bloc kept the group of 77 united on the agenda of loss and damage in spite of efforts by some developed countries to divide them at COP27 Egypt. Prior to the conference, Prime Minister Shehbaz Sharif and his diplomatic team had made determined and tedious efforts at various international forums such as UN General Assembly and Shanghai Cooperation Organizations (SCO) summit in Samarkand, Uzbekistan, to represent the case of climate justice for most vulnerable states and regions to climate-related disasters. The focal point of argument in climate justice was that the countries least responsible for climate change are the most vulnerable to its consequences worldwide.

As a result of pronouncements made at COP27, a transitional committee will start work early next year to make recommendations on how to operationalize both the new funding arrangements and the fund at COP28 next year.

Earlier this year, devastating floods in monsoon season hit Pakistan and affected 33 million people. It caused 1,730 losses of lives, over two million house demolitions, and the destruction of 23,900 schools and 1,460 health facilities. As a result, 8.4 to 9.1 million more people have fallen below the poverty line. The economic losses have been estimated by UNDP to be over USD 30 billion.

It is worthwhile to note that Pakistan and six other countries facing climate risks have been given priority as recipients of the ‘Global Shield’ funding announced at COP27. Global Shield funding will enable countries to develop protections against damages of climate disasters to cover different types of insurance against lost livelihoods, livestock, property and crops, social protection, business interruption insurance etc.

Prime Minister Shehbaz Sharif co-chaired with his Norwegian counterpart Jonas Gahr Store a high-level segment of COP27 titled “Climate Change and Sustainability of Vulnerable Communities.” The prime minister urged all the nations for collective efforts and sharing of resources and technology with vulnerable countries like Pakistan which have been impacted by the worst of the devastation caused by climate change in the recent past.

The above achievements are a reflection of successful climate diplomacy. For adaptation to climate change and disaster response, the main focus of the current PML-N-led government has been on climate justice, debt relief, and assistance for the rehabilitation process in the aftermath of floods.

The focal point of Pakistan under the leadership of Shehbaz Sharif is compensation for adversely affected countries of the Global South. Pakistan’s contribution to climate change is a meagre 0.8 per cent whereas the impact of change is mammoth in terms of financial loss and humanitarian crises like the dislocation of people and depeasantization of a large cohort of people belonging to the agriculture sector.

Similarly, Prime Minster Sharif with UN Secretary-General António Guterres reiterated the call for debt relief and climate compensation for Pakistan as the public debt was “hampering its recovery.” “We have to fight and rebuild a resilient and adaptive infrastructure which can only be done through additional funding, not loans and debt… But the gap is widening by the day. It is the duty of the Global North to understand our plight,” he said. Even UN Secretary-General called upon the international community and multilateral lending institutions to reform their policies and allow for debt swaps, especially in the aftermath of natural disasters. 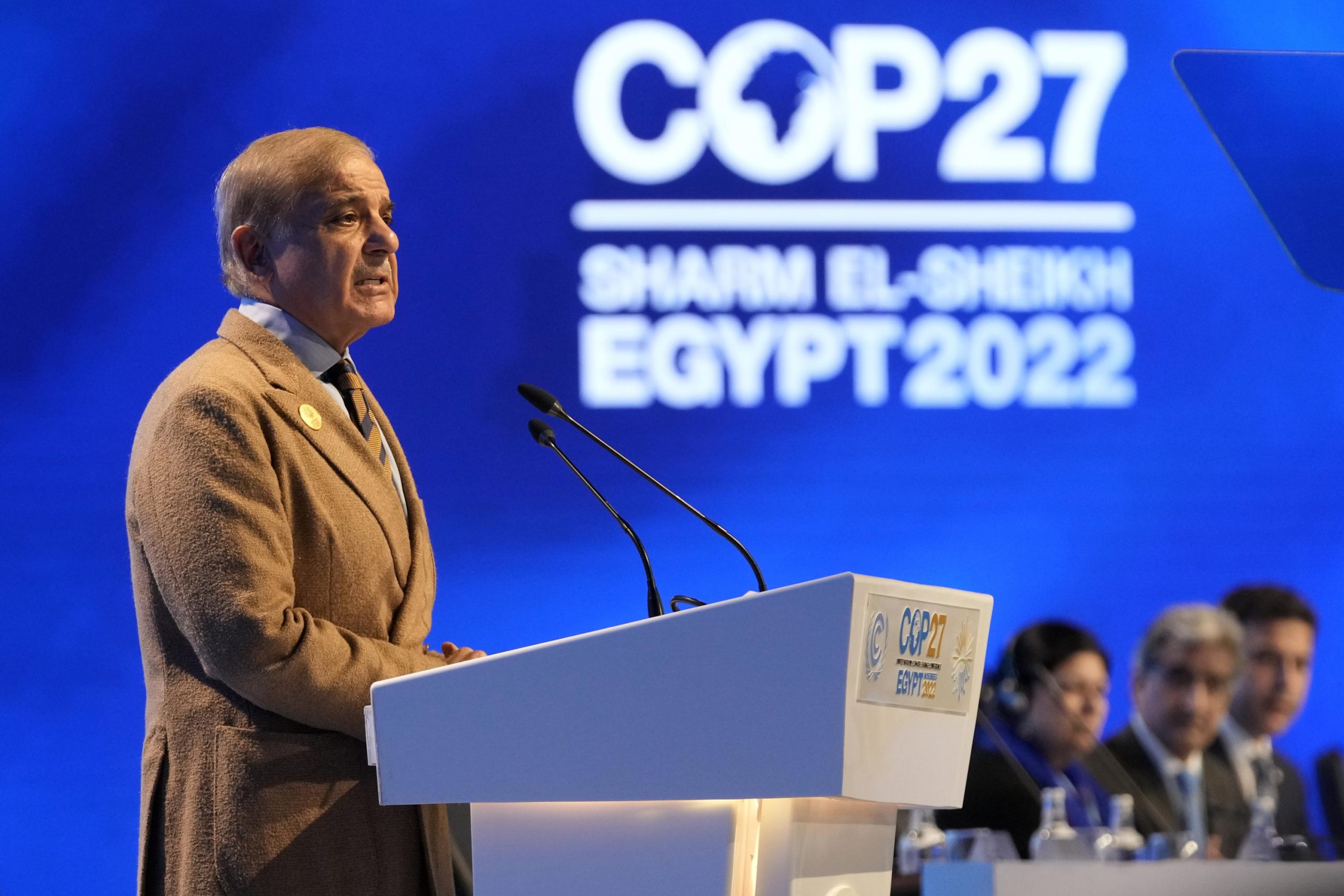 Two proposed donor conferences, one by the UN Secretary-General António Guterres and the other by the President of France, to raise funds for the rehabilitation of flood-affected areas, are expected to be held by the end of 2022.

Pakistan’s efforts to make loss and damage fund an integral part of climate justice have been widely acknowledged. Climate change activists and representatives of INGOs working on climate change praised the efforts of Pakistan being pumped into this global humanitarian cause.

It is time that government and opposition should work together on climate change by setting aside their political rivalries, to build on these achievements and find common ground on a way forward. It would give a signal to the international community that Pakistan does not solely rely on foreign aid but is serious about addressing its climate crisis and, if large-scale assistance or a debt-for-climate swap will be provided, then there would not be a change in policy from one government to the next in recovery and rehabilitation efforts. This political maturity is needed across the board if Pakistan wants to be prepared for the next climate-induced disaster.