Pakistan’s export volume has been trembling for the last two years despite tall claims of the incumbent government. Before the election, PTI leadership had criticized the PMLN policy of maintaining stable exchange and claimed that PKR was overvalued. Therefore, our exports were less competitive in the global market. Moreover, the PTI government claimed that it would boost exports to $35 Billion. Whereas, after the first year of the PTI Government, massive devaluation of 35% was witnessed. However, exports of FY-2019 contracted by more than 2% at $24.257 Billion which was growing at 13% when PMLN left the government. In FY-2020, Pakistan’s exports further declined to $22.507 billion, down by 9.13% as compared to FY-2018 export i.e. $24.768 Billion.
.
It is pertinent here to mention that exports of FY-2020 were not merely impacted by COVID-19, but several inconsistent and bungling policies of government hit the export sector, as after COVID-19 phase export of the first two months of FY-2021 was also down by 17% as compared to the preceding year.

Back in 2013, PMLN inherited more troubling economic challenges than what was left for the PTI government in 2018. Economic growth was less than 3%, inflation was approaching double digits, a whopping budget deficit of 8.2%, lower foreign exchange reserve and tax to GDP Ratio. To top it all, 10-12 hours load shedding and terrorism seized the entire economic wheel of the country. Unlike the current Government, PMLN accepted every challenge without any excuse after coming to power in 2013.Not only was the war on terror fought with insufficient resources but also fulfilled the energy shortage of the country to put the economic wheel back on track. Particularly,for the export sector, PM Nawaz Sharif had announced a 180 billion export relief package in the shape of duty drawback which was later enhanced to 220 Billion. To boost the export sector, subsidized gas and electricity was provided to industry, import duties on all major industrial inputs and machinery were scrapped or reduced, interest rate dragged down from 14% to 5.25% to ease out financing & to resolve liquidity issue and to attract more investment, tax refund processing was made efficient.

In addition, Textile City was announced in collaboration with China to enhance Pakistan textile production capacity and modernization of industry. After great deliberation, PMLN was also able to revise the Free Trade Agreement with China and finalize the FTA-II product list to export to China. For the first time in a decade, Tourism and IT Export registered immense growth during 5 years of PMLN.

PTI, after coming into power, reversed various above-mentioned reforms which trapped the export growth during the last two year, like massive devaluation and interest rate hike to 13.25% increased the input cost of industry to noncompetitive level. Furthermore subsidy on utilities (Electricity & Gas) was withdrawn and execution of FTA-II revision with China was also delayed. Additionally, 17% Sales Tax was imposed on five major export sectors (textile, leather, carpets, sports goods and surgical goods) with assurance of refunding the amount within 3 days of submitting the claim, however, at the end of FY-2020 total 150 Billion was accumulated in Government treasury on account of sales tax refund and total tax refund ballooned to whopping 710 Billion as per Govt report submitted in national assembly. All these steps of the PTI Government severely impacted Pakistan’s vision of export led growth. Glimpse of downfall in major export sector is given below:Glimpse of downfall in major export sector in given below: 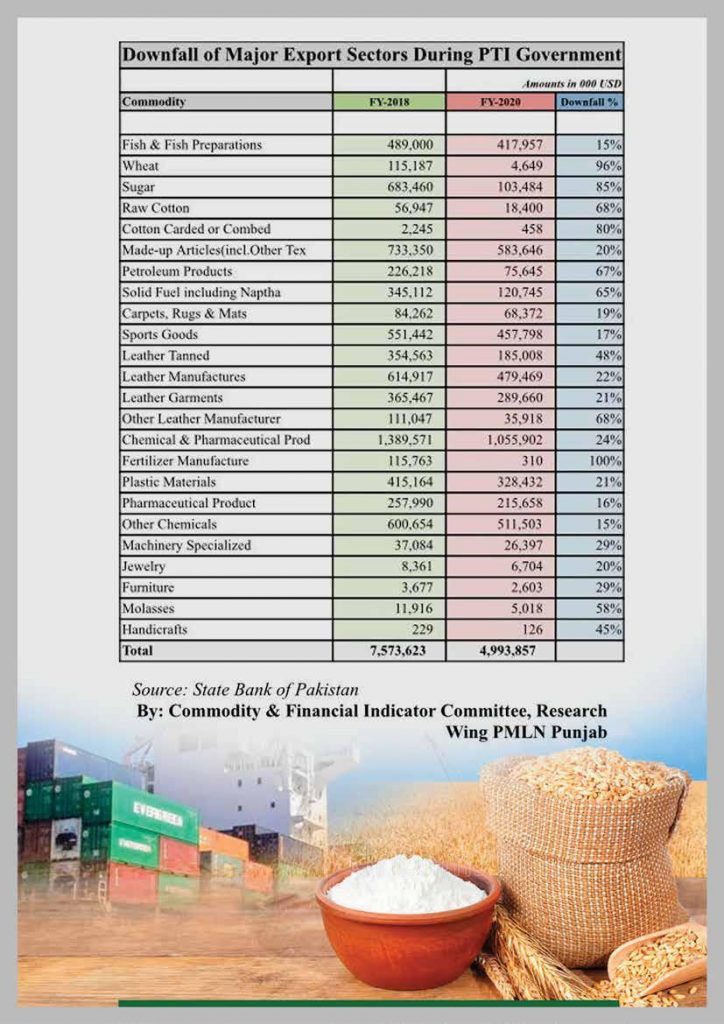