Commodities and Financial Indicator group is operative under the umbrella of PML(N) Research Wing (Punjab) with an objective of reviewing the economic performance of the government and to provide comparative analysis on a periodic basis. This team consists of dedicated professionals having hands-on exposure of managing economy, finance, and accounts.

In the past few months, the working group was able to earn the honor of presenting a complete budget analysis of Punjab’s budget for Fiscal Year 2020-21 to the leader of opposition and members of the Assembly of PML(N) Punjab. Later on, a comprehensive white paper was issued by C&FI group over the current Punjab budget dated 30-Jun-2020 in a joint press conference of senior party leaders wherein not only public concerns and budget loopholes were highlighted but also, recommendations were provided.

C&FI group also provides assistance to PML(N) stakeholders on the economic front with help of infographics and summarized analysis.

Economic Review
In the first two years of the PTI government, economic growth plunged from 5.8% to negative 1.4%, despite unrealistic proclamations made before coming to power. Current PM provided strong assurance to people that the government has a program of reforms and a capable team ready to set the economic direction right. Two years down the lane, it’s clear that they neither had a team, nor a program. Contrarily, throughout our five years, we were constantly criticized by PTI politicians and others with the following claims:

For not being able to increase exports due to overvalued rupee, PML(N) artificially held the utility prices stable to gain public popularity and hence pushed up circular debt to “unsustainable” levels, The PML(N)’s “corruption and incompetence” was blamed for inability to increase tax collection, Huge deficits by PML(N) resulted in adding up to our nation’s “unsustainable” debt.

After coming to power, PTI devalued the currency by more than 40%. However, export ended up with negative growth of 2.1% in its 1st year and negative 7.2% in the current year. In addition to this, PTI increased the utility prices significantly; gas by 140% and electricity by more than 70%, whereas, circular went up from Rs. 1032 Billion in May-2018 to 2026 Billion in Mar-2020. It was claimed that “The Naya Pakistan” is now corruption free, however, tax collection is stagnant at the same level since June-2018 which swelled double in 5 years of PML(N) tenure. In just two years the incumbent government borrowed more than 45% of total debt taken in the last 70 years of Pakistan history.

The touchy issue of inflation remained unmanaged, and has been a continuous blot on the PTI’s economic team’s performance. Inflation rose to 14% in fiscal year 2020 from less than 4% left by PML(N). Average inflation of fiscal year 2020 was observed at 10.7%.

Debt servicing has increased by 44% from 1642 Billion to 2946 Billion in two years of PTI Government and is eating up more than 70% of tax collection. 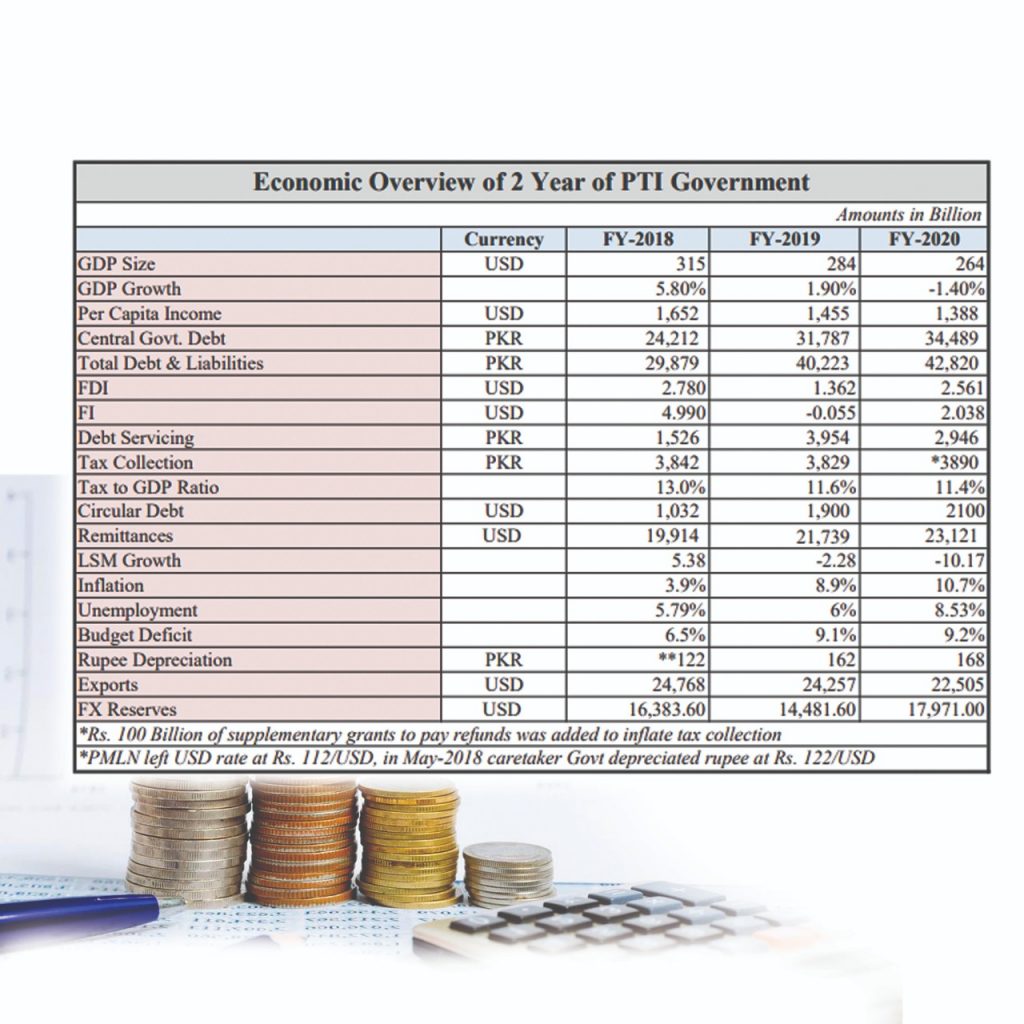